At this point I probably shouldn’t even call myself a blogger as I haven’t put anything on here since 7th March! But as yesterday marked two weeks of living on the road, I thought it was about time I got something uploaded.

We recently completed the North Coast 500 in Scotland and I’ll be writing a series of posts about this at a later date. But for now, I just wanted to make sure my fingers were still able to type and I was still able to string a mildly entertaining sentence together.

So for those of you who aren’t on one of the 1,239,506 WhatsApp groups I’m a part of, here is a little update on what we’ve been doing these past couple of weeks.

We started our trip on the Easter bank holiday weekend and as we had a pretty long drive up to Scotland we decided to make an overnight stop at the Peak District on the way. The weather was perfect so we took a long walk to a nearby waterfall and later managed to find a nice pub that allowed us to stay in their car park for the night (in exchange for our custom of course!).

After that we decided to carry on a tour of the UK’s national parks and head further up to the Lake District. Again, the weather was amazing and we found a quiet lay-by next to the lake, so we decided to stay there for the night. After an early coffee watching the sunrise we carried on our journey towards Scotland.

We crossed the border on Tuesday and decided to stop at Port Augustus before booking into a campsite for the night in Loch Lomond National Park – mainly so we could relax and have a drink! This concluded our final night on route to the North coast 500 as the next day we headed to Inverness to begin the route.

The North coast 500 officially begins and ends in Inverness. Having not visited the city before we weren’t really sure what to expect, but when we arrived we pulled up on the marina and a lovely local told us we’d be fine to stay for the night. So we got our bikes off the van and rode into the centre to look around. The NC 500 route starts at Inverness castle, so the next day we walked up to take a few photos.

In the eight or so days that followed we drove from Inverness to the Isle of Skye, all the way up to the furthest point in the UK and back down the East coast, until we reached Inverness again. Like I said, they’ll be more NC 500 posts to follow as there’s far too much to talk about in just a paragraph or two!

Since our completion of the North coast 500 we’ve stayed in Cairngorms National Park and even headed down for a day in Aberdeen. The change in weather since we’ve been in Scotland has been crazy! On the NC 500 we were wearing sunglasses, shorts and sandals, cut to three days later and we’re in the middle of the woods surrounded by snow and wearing thermals! So after the downpour of snow, we decided to take the long route to Aberdeen through the mountains to see how beautiful it all looked.

We parked up outside of Aberdeen (which was sunny, albeit very windy by the time we arrived) and made the lengthy walk in to the city centre. It was so much bigger than we expected! If you’re looking for great shopping and a good night out, we definitely recommend Aberdeen!

We had originally wanted to park up on the seafront but there was a marathon taking place on the Sunday so everything had been taped off, but we stayed on the harbour which actually worked out better in the end because as we walked back to the van we saw a group (is that called a school?) of Dolphins in the harbour.

In the morning Danny got chatting to a local who said that we needed to visit Findhorn, a small village that has the UK’s largest ecovillage and ‘hippy’ commune. Not sure that’s how they refer to themselves hence the quotation marks, but we certainly wanted to give it a look. It meant driving back on ourselves slightly, but that was OK because we still had a few places we wanted to see on the way down past Loch Ness.

Where are we right now?

So as I write this, we’re in Findhorn. It is potentially one of the smallest villages we’ve ever seen, with a shop, two pubs and a cafe. But it has a beautiful beach and the locals are super friendly, so we’ve pitched up for the night with a couple of beers and a bottle of whiskey.

Watch this space for the upcoming North coast 500 blog posts when I eventually get my act together and start being a good blogger again!

The North Coast 500 – Reaching the north coast of Scotland 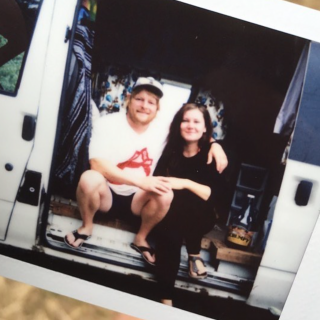